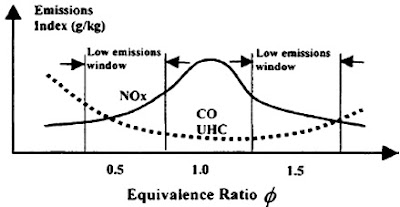 Figure 1: Emissions dependence on equivalence ratio.
Carbon monoxide
Large amounts of CO are produced in two occasions:
In practical systems CO emission values are found higher than the calculated equilibrium concentrations. Furthermore, these values are highest in low power settings where the temperature is relatively low. This suggests that equilibrium theory cannot accurately predict CO emissions, since the formation of most of them is strongly related to the incomplete combustion of the fuel. The latter could be evoked by one or more of the following:
Unfortunately, low CO levels can be achieved only in a narrow range of equivalence ratios (φ) between 0.7 and 0.9. At lower values of φ, CO levels are high due to the inadequate rate of oxidation, while at higher values of φ they are high because they reach their equilibrium values. Since CO is fairly resistant to oxidation, in many practical systems, its oxidation is “rate determining”. In that case, the residence time and the mean temperature will be the factors on which the complete oxidation to CO2 will be depended.
Unburnt hydrocarbons
At the combustor’s exit UHC can be found sometimes in large quantities as the result of incomplete combustion of fuel. In the term UHC are comprised all the species that generated from the thermal degradation of the initial fuel, like methane and acetylene, as well as unburnt droplets (or vapour) of the parent fuel. Poor fuel atomization, low burning rates and quenching effects due to film-cooling air are mainly the parameters that are associated with the production of UHC. A simple way to reduce UHC emissions is by increasing the power settings of the engine.
Oxides of nitrogen
In the term NOx two main components are included: nitric oxide (NO) and nitrogen dioxide (NO2), the most important of which is NO due to its higher concentration levels. Nitric oxide is the result of atmospheric nitrogen’s oxidation in the high-temperature regions of the flame. The oxidation process is endothermic and it only proceeds at temperatures above 1800 K. As a consequence, and contrary to UHC and CO formation, NO is formed only in the hot regions of the combustor and its concentration levels increase as the engine reaches its full power. There are three mechanisms for NO production:
a) Thermal NO
In the combustion process NO formation proceeds according to the Zeldovich chain mechanism:

In many practical systems the high temperature and oxygen concentration may be responsible for the high NO formation rates even at fuel-lean equivalence ratios.
b) Prompt NO
Sometimes, in low temperature – fuel-rich flames, NO can be found earlier in the region of the flame, which is in contrast with the idea of a kinetically slow process. Since the responsible mechanisms for the production of the so-called “prompt NO” are not yet completely understood, the prompt NO concentration cannot be accurately predicted. However, in modern gas turbine combustors prompt NO levels will be between 0 and 30 ppmV, with low values occurring at high temperatures (lean φ) and high values at low temperatures (fuel-rich φ).
c) Fuel NO
Fuels that contain organically bonded nitrogen constitute another source of NO, which is known as “fuel NO”. The nature of combustion process will define the percentage of nitrogen that will be converted to NO. The heavy distillate fuels may contain even 1.8% organic nitrogen, whereas in light distillate fuels this value could be lower than 0.06%. Therefore, fuel NO can be a significant fraction in the total NO emissions (depending on the rate of nitrogen conversion). According to available data [5], the mechanism of fuel NO formation due the fuel-bound nitrogen recommends the following:
d) NO2 emissions
The NO that is produced according to the above mechanisms is oxidized afterwards to NO2 when the required low temperatures are reached, usually after leaving the engine. The conversion of NO to NO2 actually starts in the zones of the combustor that there is a significant excess of air. Although the fraction of NO2 is very small at full load conditions, at idle, NO2 can be even the half of the total NOx (NO + NO2) emissions. This is in agreement with the fact that at low temperatures NO2 is more stable than NO.
Soot – smoke
The exhaust smoke of a gas turbine engine is the result of finely divided soot particles production in fuel-rich regions of the flame. Inadequate mixing is the cause of smoke production in any part of the combustion zone. When pressure atomizers are used, the main soot-forming region is inside the fuel spray close to the centre of the combustor. This occurs due to the recirculation of the burnt products, which move upstream – towards the fuel spray – where local pockets of fuel vapour are enclosed in oxygen-deficient gases at high temperature. So, soot is produced in these fuel-rich regions, although the combustor as a whole may operate fuel-lean.
The most of the soot that is produced in the primary zone is then consumed in the following zones. Therefore, the primary zone governs the soot formation rate, whereas the intermediate and dilution zones rule the soot oxidation. The overall soot concentration is the difference between soot produced in the primary zone and soot consumed in the subsequent zones.
Soot formation is a four-stage process including particle nucleation, surface growth, coagulation and oxidation. It takes place in flames that contain at least 1% by weight hydrogen. The formation process is consisted of particle nucleation and growth, followed by soot oxidation, in which soot is burnt in the presence of oxidizing species in order to form gaseous products, such as CO and CO2. The main soot oxidizer is O2 in lean flames and OH in fuel-rich flames, or at flames where very high temperature exists (and [O] [O2} << [OH]).
Soot analysis has shown that soot is constituted mainly of carbon (96%) and a mixture of oxygen, hydrogen and other species. Soot density (1800 – 2000 Kg/m3) is almost equal to the graphite density. Soot is the principal source of thermal radiation in the combustor, whereas smoke represents the uncombusted carbon and hydrogen, being also responsible for the reduced efficiency of the combustion process. Since soot is not an equilibrium product, its concentration cannot be estimated by chemical kinetics. Thus, in most of the practical systems, fuel atomization and fuel-air mixing are more important in soot formation process than chemical kinetics.
References
The article was based on my M.Sc. thesis:
Samaras C., 2010, “Emissions estimation from industrial gas turbine combustors”, M.Sc. Thesis, Cranfield University, UK.
The figure was found from:
Li, Y. G., and Hales, R. L., 2002, “Gas turbine emissions control using variable geometry combustor and fuel staging”, 40th AIAA Aerospace Sciences Meeting & Exhibit, Reno, NV, US.