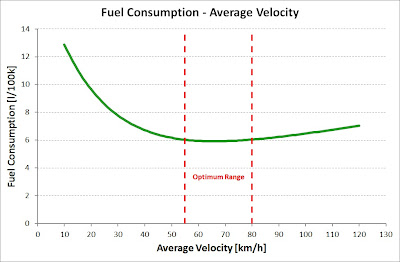 The chart above depicts the relationship between the fuel consumption and the average speed of a typical small gasoline (< 1400 cm³) Euro 4 passenger car. The chart can be divided into four areas, corresponding to four velocity ranges:
0 – 30 km/h (0 – 18.64 mph): For velocities below 30 km/h the fuel consumption is quite high (above 8 l/100km – 29.34 mpg). Unfortunately this speed range is typical for cars circulating in a city – urban environment. Cars are subjected to a continuous start and stop motion due to junctions and traffic lights. Furthermore, at the main city roads (at the center of the city for example) there is very often traffic congestion. These two parameters – as well as some others – lead to a very low average speed, and, consequently, to high fuel consumption and emissions.
30 – 55 km/h (18.64 – 34.18 mph): Until 55 km/h, as the average speed increases the fuel consumption drops. This velocity range is quite common in sub-urban or rural areas, where there is less traffic congestion and vehicles are able to move with higher speeds.
55 – 80 km/h (34.18 – 49.71 mph): For the particular vehicle, this is the optimum velocity range that minimizes the fuel consumption (around 6 l/100 km – 39.15 mpg). This range corresponds to rural or even highway driving conditions. Fuel consumption is almost steady in this range. Let’s look an example with numbers: The flat line in this range suggesting that the car A, which moves with an average speed of 55 km/h will consume almost the same fuel with a similar car B that moves with 80 km/h. So, if these two cars have to cross a distance of 100 km, then car B will reach to the destination 34 minutes earlier than car A, having consumed almost the same fuel (6 l). So, if the driving conditions are suitable and the speed limits are high, within this velocity range, driving in higher speeds will save travel time!
80 – 120 km/h (49.71 – 74.56 mph): Within this range as the average speed increases the fuel consumption augments too. This velocity range is quite common in highways. Contrary to the previous example, car C that moves in a highway with an average speed of 120 km/h will reach to the destination 25 minutes earlier than car B, which moves with 80 km/h, BUT, car C will have consumed almost one liter more fuel. The fuel consumptions below were calculated with the fuel consumption calculator.

The previous analysis is quite idealized. There are many parameters that are involved in fuel consumption, like engine’s operational conditions, air resistance, driver behavior, road and ambient conditions, tire pressure and many others. However, the average car speed is a useful indicator of fuel consumption. So, the next time that you will have to drive for a long distance try to keep your instantaneous car speed within the range 55 – 80 km/h as much as possible, in order to minimize the fuel consumption of your car.
Read also
Fuel Consumption Calculator
Category: Articles
Share0
Tweet0
Share0