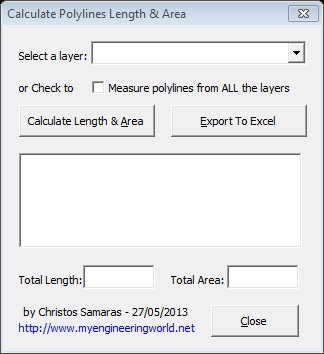 At the beginning of April, I posted an Excel VBA code for creating a polyline in AutoCAD using coordinates from an Excel workbook. In the comments sections of that post, Jake asked me to do almost the opposite procedure. So, below you will find an AutoCAD VBA add-in that can:
In general, I think that this add-in might be quite useful for civil engineers, as well as for anyone who uses polylines at his/her drawings and needs a way to calculate their length and area quickly.

I should point out that the add-in calculates the area from closed polylines only. So, this means that when the polyline was drawn, the closed option should have been used at the end. If a polyline was left opened or it was manually closed (by linking the last point with the first point), then the code will not take its area into account. However, its length will be measured. The video below has an example of polylines who look closed, but they aren’t.

How to use it
If you have closed the form and want to re-use it, you don’t have to reload the file. You can just write VBARUN at the command line and continue the procedure from step 6. If you have AutoCAD 2010 or a newer version, then you will have to download the VBA module from Autodesk, since from 2010 VBA is not installed with AutoCAD.

The short video below demonstrates the use of add-in in practice. By the way, in this video, you will listen for the time my terrible voice!!! I know that I sound like a robot, but, I hope that at least you can understand what I am trying to say…

The file was tested with AutoCAD 2013, but it will probably work in either older or newer AutoCAD versions.