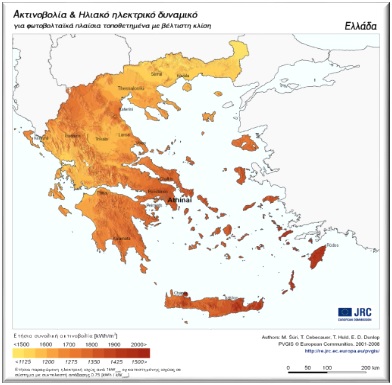 The installation of photovoltaic systems (PV systems) – either at buildings or at field – was one of the most promising investments the last 4 – 5 years in Greece. The government tried to enhance the installation of PV systems either by subsidizing the value of electricity produced from PV systems (typical values were 0.45 – 0.55 €/kWh), or by offering tax-free profits. This led a lot of people getting involved in the PV “madness”, although the majority of them had insufficient knowledge and experience.
Here we will not make an overall assessment of PV systems in Greece. A general overview about the situation in Greece regarding the renewable energy can be found here. This post is about a small PV system calculator that I developed in Excel. This workbook can help someone to make a preliminary calculation regarding the annual estimated electrical energy, as well as the annual estimated profit and the years of payback of a PV system installed in one of the 51 prefectures of Greece.
Of course the results are far from being considered as accurate. However, they can give an order of magnitude, as well as a preliminary economical assessment of the investment. So, use this workbook only as a rough guide.

As the picture above reveals, the required input data are quite self-explanatory. So, simply select from the dropdown list the area in which the PV system will be installed (51 available choices – prefectures), then select the panels orientation (horizontal, vertical or inclined), and, finally, enter the values for the installed PV power (in kWp), the cost per kWp installed and the estimated revenue per kWh of electrical energy sold.
If the input data were entered successfully, the workbook will calculate automatically:
In order to improve the results, apart from the total estimated cost of the PV installation, in all the other results a minimum and a maximum estimated value is calculated. In this way the workbook results are probably closer to the real ones.