An Introduction To Pressure Vessels (Presentation)

An Introduction To Pressure Vessels (Presentation)

How To Develop A Small Hydropower Site

How To Develop A Small Hydropower Site 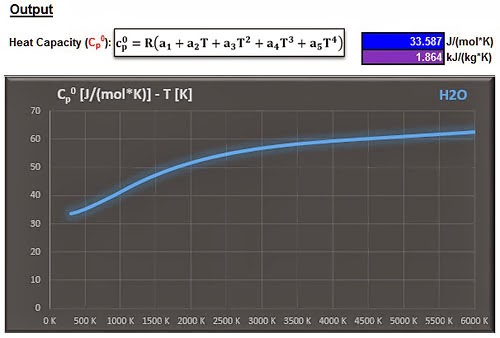 The knowledge of thermochemical properties, such as heat capacity, enthalpy and entropy is quite important when solving combustion-related problems. At 1961 Frank Zeleznik and Sanford Gordon invented a method for performing a simultaneous regression of the thermochemical properties in order to approximate more than one property with a single polynomial. They ended up with the famous NASA 7 term polynomials first published by Zeleznik and Gordon (1962) and McBride et al. (1963).

The NASA polynomials have been evolved for more than 50 years and they are widely accepted and extensively used in various applications. The polynomials are usually provided in large databases. One of these databases is the free database named “Prof. Burcat’s Thermodynamic Data”, which contains polynomial coefficients for more than 1300 species. One major problem with this database is that is provided in a text file, which is quite uncomfortable for calculating purposes. In order to overcome this difficulty, I decided to develop this workbook, so as to automate the procedure of calculating thermochemical properties from Burcat’s database.

It should be noted that the value HT obtained from the polynomials is the “engineering enthalpy” defined as:

The usage of the workbook is quite straightforward. After enabling macros just select the specie from the dropdown list and press the Get Properties button. After a few seconds, all the NASA coefficients are loaded from the database (sheet Data). Then you can enter the desired temperature and the workbook will calculate the thermochemical properties using the polynomial functions described above. Note that on the second page of the workbook there are 3 charts that represent the thermochemical properties as a function of temperature for the range 298 – 6000 K.

All the raw data used in this workbook came from the “Extended Third Millennium Thermodynamic Database for Combustion and Air-Pollution Use with updates from Active Thermochemical Tables“. The database initiated and built since 1972 by Alexander Burcat, Aerospace Engineering, Technion-IIT, Haifa, Israel.

As prof. Burcat states: “This database is provided free of charge for non-commercial use, on condition that proper quotation will be included in the pertinent publications. It is strictly forbidden to include this database as is or parts of it in any commercial database, software, firmware or hardware and any other type of commercial use without written permission from the authors”.

More information about this database can be found at prof. Burcat’s site:
http://garfield.chem.elte.hu/Burcat/burcat.html